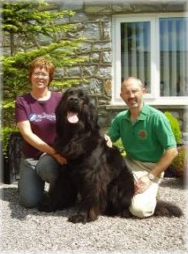 Julie & Mike have owned Crosslands since 2001. They made many modifications to the existing kennel block including new roofing, new exterior walls in the kennel runs, improved heating system, new isolation kennels and new perimeter fencing. They also landscaped the paddock areas and created car parking facilities for the customers.
In 2009 they decided to expand and build an extension to the existing kennels to include 11 new kennels and a brand new grooming parlour. Along with the new extension block, Crosslands Hydrotherapy Centre was established in 2009. Prior to opening the centre, Mike & Julie both completed accredited courses at the Hawksmoor Hydrotherapy training centre, gaining a certificate in Hydrotherapy.
Mike & Julie currently own a Golden Retriever – Faith and a Newfoundland ‘Isla’. 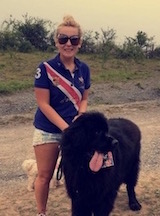 Laura joined Crosslands in September 2015.  She has recently rescued a Newfoundland ‘Hugo’ and also has a Shitzu and a Shishon.

Laura qualified as a groomer in March 2018, she also works in the kennels helping to take care of the many dogs who ‘holiday’ with us. 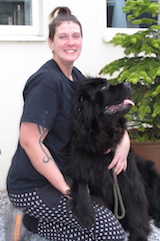 Amy joined us in January 2018. After spending a year working in the kennels she completed her canine hydrotherapy course and now runs our hydrotherapy centre along with Mike and Sarah. She still helps with caring for the dogs in kennels with administration and some maintenance.

Amy also has a degree in Human Sports Science. She has several horses, 2 boxers and 2 french bulldogs.

Gemma joined us in 2019 and is involved in the day to day care of the dogs in kennels.  At the moment Gemma is without a dog but has been a dog owner in recent years.

Zoe joined us in 2019 and is involved with looking after the dogs in kennels.  Zoe currently has 3 dogs, a mastiff, a terrier and a X breed.